I was listening to Pandora (as I do from time to time) and a song came on I hadn’t heard in years (like 12).  “The Roses” by Caedmon’s Call.

I was thinking about Haiti (as I do from time to time) and a certain person popped into my head.  Maximilian. 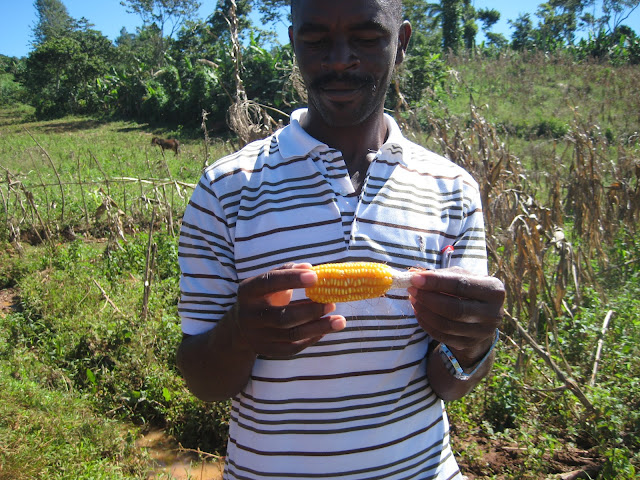 These two just happen to coincide.

One of the most memorable events in our recent trip to Haiti was when Maximilian took us by his house.  We had just hiked down the steep mountain to the well in Fond Baptiste, and back up.  The air was hot; I was thinking inwardly, because I was extremely tired.  At the top of the mountain was Maximilian’s humble home.  His wife and daughter were outside shucking corn. 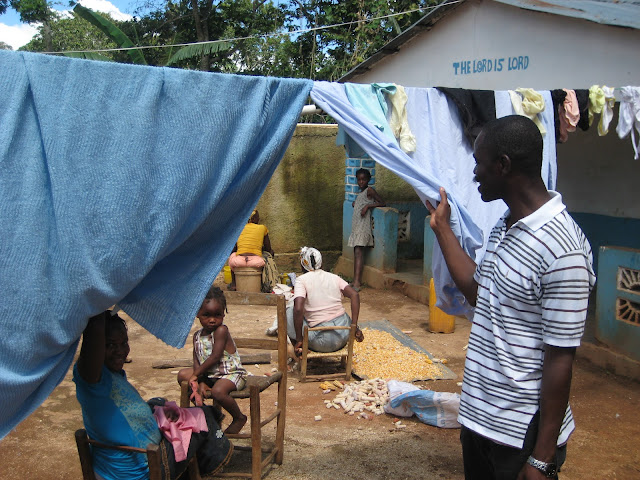 Maximilian had two buildings with brightly colored walls that were tucked into the dense forest of the Haitian mountains.  There were clothes drying on the clothesline strung out across the property.  His wife had to pull back a blanket to greet us as we arrived.  His daughter of three or four was shy, but his wife was inviting and happy to see us.  The building to the left was Maximilian’s house.  It had light blue walls and over the door was written “The Lord is Lord.”  The building to the right had yellow walls with pink columns.  Under this cheerfully colored building was a grim reminder of what this life has in store for every one of us, no matter our geography.  There were arches under the yellow building sealed with cement.  This is where Maximilian buried his family.  If I remember correctly he said he buried older relatives, and at least one child who died. 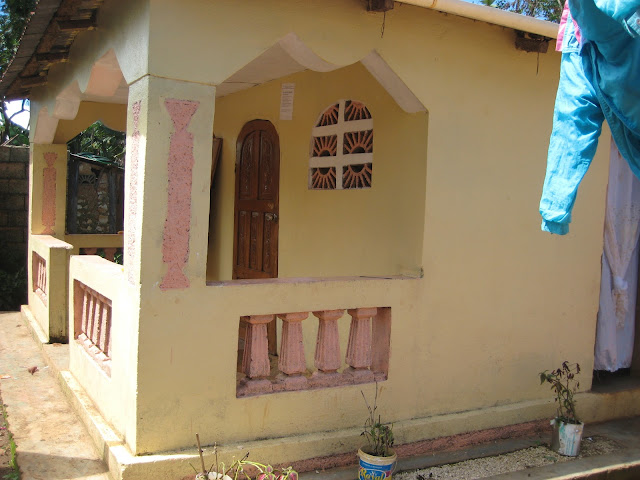 I have not had to deal with death very often.  In the 30+ years of my life I have only attended a handful of funerals for my own family.  Some were rougher than others.  Most were older people toward the end of their life, but some were tragic.  One thing is the same in all those instances though:  I didn’t have to bury them myself.

I’ve heard losing a child is the greatest sadness one could feel, but having to bury that child yourself, must be extremely difficult.

On our last night in Haiti we met with the Leadership Council in a church building across the street from where we were staying.  At the top of their lungs the Leadership Council started to sing several hymns to open the meeting.  It nearly brought me to tears.  My mind went back to a few days before when I was standing at Maximilian’s house.

Maximilian had personally buried family members, including his own child, yet still found joy in worship.

As Americans we think our life is so terrible.  When will the economy turn around?  Why do I hate my job?  Why does God bless others, but not me?  Why doesn’t FSU win more games?  There are those who have to deal with much more than we could imagine, yet still find joy.

You may be asking yourself, “the point is, what, exactly?”  The truth is, I don’t think I have one.  This is just a story.  I wanted to tell a story of a man who has had to deal with great obstacles in his life, but who sings at the top of his lungs, even in the midst of strangers.  Is Maximilian perfect?  Far from it.  Is he some sort of hero?  I’m sure he would tell you he is not.  Did he make an impression on my heart?  Definitely.

The lyrics to Caedmon's Call "The Roses" goes as follows...

High above the valley of Quito
And old man and his bride grow roses
Red and yellow, white and golden
To him they are precious as children
Their daughter, she moved to America
One more brick in the Tower of Babel
She has a son that they've never seen at all
They're praying that they raised her well

A man, his bride, his children, and his roses
Planted in faith and waterd in tears
Honey, that's all they have and they're happier here
Than any of my friends back home
They met Jesus and they really know Him

Now I'm back at home, all alone
And I'm trying to find my thoughts
Of that old man so inspiring
And the TV's always on
And the phone, it won't stop ringing
These bills, they keep on screaming
I'm paying for the things we never really need
Wonder what he's doing right now
Maybe walking through is simple field
Thinking about how God has blessed him so
A man, his bride, his children and his roses